A comparison matrix helps students to organize the information they have learned and to demonstrate the higher-order skills of comparing and contrasting. I was introduced to them through exposure to Robert Marzano during professional development. In my Latin classes, this has been very fruitful when covering different topics of ancient culture and comparing them to our society.

Below you can see the comparison matrix we recently used to understand the English culture reading in Stage 7 of the Cambridge Latin Course, a reading about ancient burial rituals and attitudes toward death. 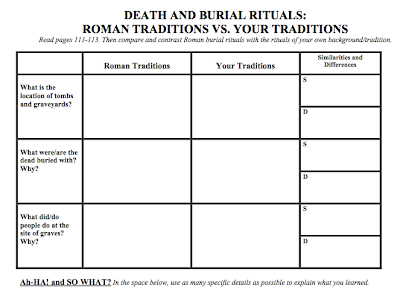 Note: A template for this document was distributed school-wide after a professional development session covering the strategy. I am still trying to figure out who created it to begin with...
You can download this document below and change whatever you want based on the needs of your class. Feel free the change to title, directions, and in the first column the "things to be compared." Make sure that your students complete the "Ah-HA! and SO WHAT!?" section: The best learning happens there.

I decided to start lesson-planning with a computer, instead of with old-fashioned paper, for four reasons:

1) Ease of access. Lesson-planning on paper gets bulky, especially towards to middle and end of a school year; I found myself never having access to past lessons when I wanted to refer to them at home. If I intend on doing school work of any kind, however, I always have my computer with me to access past files. So why should lesson-plans be any different?

2) Synergy. Microsoft Office is a big part of my teaching; having access to all of the documents I have created while lesson-planning, and being able to create new documents without changing mediums, is powerful.

3) Sharing. I post a lot of stuff on my class website so that students, parents, and administrators can have ready access. I figured that all three of those parties might also be interested in seeing my lesson-plans posted from time to time. Having my lesson-plans on the computer also makes them easier to share with fellow teachers (e.g., via list-servs).

Notice how the word "access" appears at least once in each of those three reasons. (And I tried not to repeat myself!)

and finally, 4) Speed. With the document I will describe and share in this post, it is quick and easy to create detailed lesson-plans.

Here is a look at the document I created to streamline to lesson-planning process: 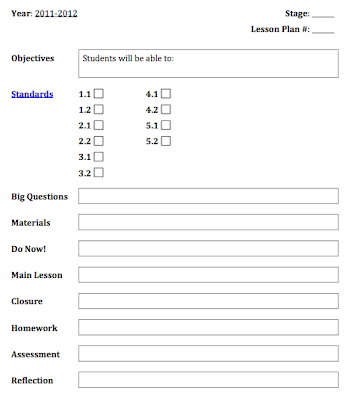 It contains a space for each part of a lesson that we teachers are encouraged to include in order to keep our students engaged "from bell to bell." I have found that using this document pushes me to think about Do-Nows and Tickets Out when otherwise it might be easy to overlook these valuable pieces of a successful classroom routine.

The document is "macro-enabled," which means that when it is "locked," only the "text fields" can be edited. This is very beneficial because one does not need to waste time formatting while lesson-planning.

To make changes to the backbone of the document (for example, to change "Do Now!" to "Bellwork," or to change "Stage" to "Chapter"), you must "unlock" it. When you are finished, you can "lock" it again to make your changes permanent. To toggle between "locked" and "unlocked" will be a little different if you are on a Mac or PC. 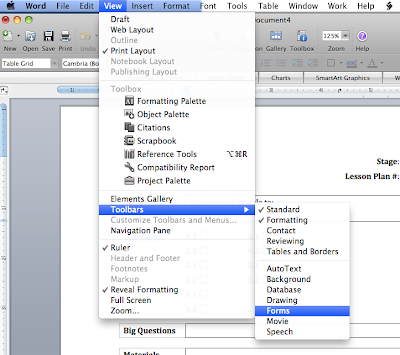 You will wind up with a new menu that looks like this:

The "lock/unlock" option is circled in red above, the button furthest to the right. 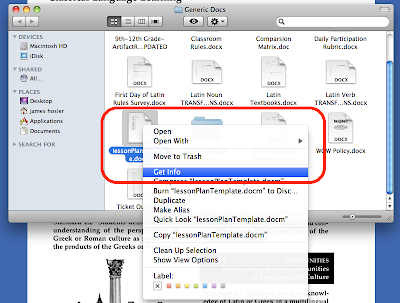 If you are on a PC, look here for a good guide to forms.

Finally, you can make the document a "template" so that when you save it, you do not save over the original but are instead prompted to save as a new file. The process is a little different if you are on a Mac or a PC.

If you are on a Mac, find the locked version of the file you want to make a template, right-click, and select "Get Info": 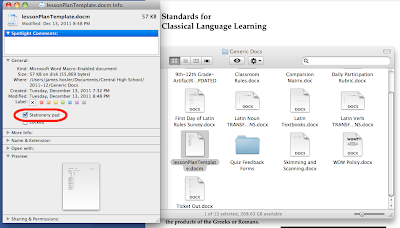 If you are on a PC, look here for a good walk-through. Look under the section "Create a Template Based on an Existing Document."

Getting Started with Oral Latin: An Introduction to Latin Q & A

In this post I describe the activity I recently used to get going with oral Latin in my Latin I classes. I was not taught Latin in all four domains (i.e., reading, writing, listening, speaking), but I have decided I want to teach that way. This activity, then, was as informative for me as for my students, if not more so. I observed, even with the basic questions and answers described below, my students thinking in a way that would be impossible to reproduce using only reading and translation. This post is greatly indebted to an article by Ginny Lindzey on www.latinteach.com.

Activity Name
An Introduction to Latin Q & A

Materials
Whiteboard and markers, or equivalent; source of sentences for each student, such as a textbook

Time
The first time this activity took us 30-40 minutes, but that was mostly spent explaining the use of speaking, hearing, and writing Latin. I imagine when we do it again it will take 15 minutes.

Description of Activity
This activity could be done using any type of Latin passage or sentences. I recently introduced my students to hearing and answering questions in Latin using the Stage 8 "Picture Sentences" of the Cambridge Latin Course. We focused on eight sentences that looked something like these:
After reading out the sentences quickly for my students, I explained that we were going to learn how to listen to and answer three basic types of questions:
As a class we were able to look back at earlier sections of the book to discover what these questions were asking. I think this was a lot more effective than it would have been had I simply given them the definitions of the words in the questions.

Two points before we go forward: (1) I modeled the procedure of the activity after "Think-Pair-Share." I figured this would give the students more confidence when it came to speaking their answers out loud, and that they would be more willing to speak if it was only to one partner and not in front of the entire class. Both of these assumptions turned out to be true. (2) I also made sure to structure the activity so that my student would gradually be forced to transition away from just reading out their answers. I allowed them to write in the beginning, but, as you will see, pencils were soon not allowed.

The rest of this post will describe in more detail how I accomplished the two points in the previous paragraph.

For the first part of the activity, after reading the sentences and explaining the three basic questions, I wrote one question on the board for each of the first three sentences. Of course I also read out the questions slowly. I had them write down the questions from the board on their own paper in a chart like this:

I then gave them five minutes or so to write down their answers in the "Answers" column on their own paper. I made sure they wrote their answers in complete Latin sentences. After they were finished, I had each student turn to a neighbor and check his or her answers by saying them out loud. Just letting a partner read what you had written down was strictly forbidden! Only after each student had confirmed his or her answers and practiced pronouncing them did I repeat the questions out loud to the class and call on volunteers to answer in Latin.
With the first three questions done, we moved on to the next three. We covered these with the same procedure of Think-Pair-Share we had used on the first three questions, but with one important difference: I did not write the questions on the board for them to copy. Instead, they had to write down the questions on their own paper as I asked them out loud to the class. I repeated each question several times, and afterwards each student had something like this on his or her paper:

Again, they answered each question in a complete Latin individually before turning to their neighbor to practice.
After I repeated the questions and called on three different volunteers, we were ready for the final two questions. Here we practiced truly oral/aural Latin. I did not write down the questions on the board, nor did I allow them to write down the questions or their answers on their own paper. I asked the final two questions in Latin (e.g., 7. qui plauserunt? and 8. ubi cives riserunt?) and called on two different volunteers for answers.
Assessment
Students are assessed informally as they complete their work and when they volunteer to answer. The teacher could also collect each student's "Questions and Answers" chart for a closer and more formal evaluation.
Posted by James Hosler 0 comments

Email ThisBlogThis!Share to TwitterShare to FacebookShare to Pinterest
Labels: on Latin pedagogy

Purpose
for students to practice translating Latin and revising other translations

Time
anywhere from 10-30 minutes, depending on the length of passage for translation

Description of Activity
Each student gets a copy of the Translation Cyclone Answer Sheet. There is plenty of room in each box for the students to correct each other's translations as the papers get passed around the room. Here is an example (yours will likely be longer, but it all depends how many sentences students will translate): 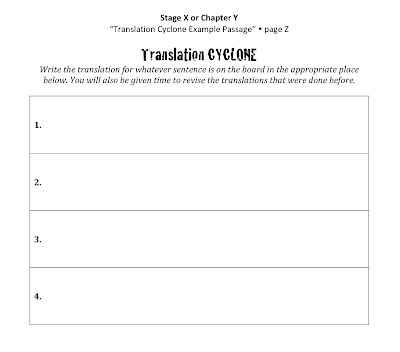 Using the Translation Cyclone PowerPoint, display one sentence at a time of whatever passage you choose for them to translate for this activity. Here is an example PowerPoint of a passage of my own creation (it is only four sentences, to fit the example answer sheet above):

You can download the full .pptx version of this presentation via the links under "Materials" above or "Downloads" below.
Right before you switch to a new sentence on the PowerPoint, have the students swap papers. (It can be fun to say something dramatic to mark each swap, such as "Cyclone, cyclone, cyclone!) Make sure that you plan out ahead of time how you want the papers to get passed. My room is set up in a grid, so my students pass their papers like this: 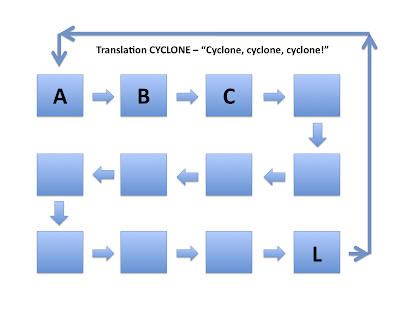 A passes to B, B passes to C, and so on; I personally take the paper from L up to A to make the transition smooth. In this way the papers get around the room. Students are therefore focused in each round first on translating whatever sentence is on the screen, and second on revising any incorrect translations they notice from previous rounds. Keep things moving quickly with a stopwatch.

Because you always get a paper from the same person, you come to know their bad habits in translation. This leads to exchanges during the activity like, "Start putting periods at the ends of your sentences. I am tired of adding them!" Statements like this from fellow students are much more effective than the same advice from a teacher.

Assessment
Students are assessed informally throughout the activity as the teacher circles the room and checks their work as they work. You can also review the translation as a whole after the activity to gauge how well your students understand.