Ben Slavic (benslavic.com/blog) describes a procedure, he calls it Look and Discuss (L&D), in which the teacher leads the class through describing a picture that is projected on the board. The goal is to get comprehensible, compelling repetitions on target structures. It works really well.

How about adding these two activities? The inspiration came from my curriculum director. Both involve projecting a picture on the board and leading the class through a discussion in the target language in order to provide comprehensible input. Of course the normal rules apply: The teacher is trying to speak comprehensibly in the target language and is using circling and personalized-question and answer (PQA) throughout the discussion.

1. What's wrong with this picture?
Focus the kids on the wacky stuff in an otherwise normal picture. Here are some good pictures to use: http://pbskids.org/berenstainbears/games/wrong/

2. What are the differences between these pictures?
Say what is in one picture but not in another picture. Some examples: http://www.highlightskids.com/double-check

These ideas need to be tested in the classroom; I have not yet tried either. These are popular "for kids" activities, so they have the potential at least of being on the level of our new language learners.

Some more brainstorming: (for number 2 above) For more discussion, you can ask something like: "Is the girl happier in the first or the second picture? Of course! In the second picture, because in that picture she has two scoops of ice cream!"

Or how about: (for number 1 above) "Would the boy be happier if the fish tank were on the ground? Of course he would! He wants to feed the fish but he can't reach them up on the ceiling!"
Posted by James Hosler 2 comments

These are hanging in the front of my room. Basically they are classroom rules, but I have tried to phrase them in positive, productive terms. They are based heavily on various sources, mainly from Ben Slavic's wonderful community (benslavic.com/blog). 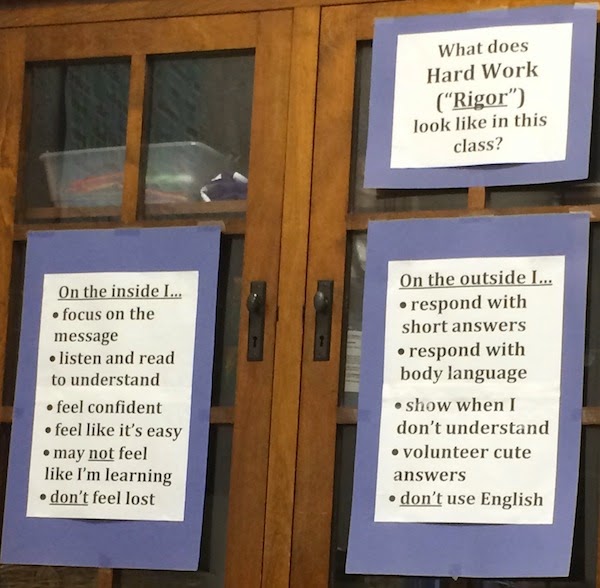 The problem with my old standards was that they were too limiting. I was not able to use a wide variety of assessments and I started to feel really stifled toward the middle of the year.

I just finished the second draft of the standards I will use next year: https://docs.google.com/document/d/1gU1qIcSMnPUWpJZ93w9L1v1xNl10GF41QerY7gYDBns/edit?usp=sharing

I tried to make them more general so that they would allow me to use a wider variety of assessment. They should also work for any level of any language at any school that offers the standard four year course.
Posted by James Hosler 5 comments

Embedded readings are increasingly complicated texts that eventually build up to an "authentic" or "original" version. For more information, see the website of its founders: http://embeddedreading.com/about/

Basically, embedded readings are used to help students read an advanced text by gradually adding on levels of detail. I also like to simplify the language as well as deleting unnecessary details, especially in the earlier stages of the process. I call these "simplified versions" of a reading. Several of them may be needed before the class is able to read the "original version" fluently. The early simplified edition may not look much like the original version, but there will be some new vocabulary for the students to master and the major plot-points will all be present, even if they are expressed in simpler language.

The problem with simplified versions is that the teacher has to create them. On a typical day, if I am wanting the class to read a new story, I will provide them a simplified version (or two or three, maybe over several days) which I have prepared ahead of time. We will then read the text together with the laser-pointer and discuss it in the target language.

1) I am looking at the original version of the text, the version which I am simplifying. Only I am looking at this text. The students are just listening (and watching actors; more on that in a second). I tell the students in simple language what happens in the story and they just listen. We of course circle any new vocabulary which I need for this first simplified version.

2) There are actors for each character (and maybe even for some interesting objects) in the story. While I tell out the simplified version of the passage the actors act out the action. If an actor does a bad job, we all ask him or her in all humor please to do it again!

3) The story-writer types out what I am saying on the computer. I like to project what the story-writer is writing on the screen while he or she is working. So there is me telling the simplified version, actors helping everyone to visualize, and a gradually-emerging written version of passage up on the screen for all to see.

When we are done and the story-writer has finished, I can clean it up and presto! a nice simplified version, which every student has just seen being written and acted out. We can now proceed with our normal procedure of laser-pointer reading and discussion in the target language.
Posted by James Hosler 0 comments

The Teacher is Stupid! A Twist on Choral Reading

I use choral reading/translation in my classes a lot. A video of the procedure by Ben Slavic, my teacher in this and many things, can be found here: http://vimeo.com/58421936

And here is a shorter video of  my classes doing a choral reading/translation: https://www.youtube.com/watch?v=YDKlkMuMAb4&feature=youtube_gdata_player

Basically, the teacher (or, better yet, a student) uses the laser-pointer to point the class through a reading of a text. When the pointer points at a word, the class gives the translation. In this way we read through the entire text.

A fun change is to play the game I just made up: "The Teacher is Stupid." The pointer still points through the text, but now it's only the teacher giving the meaning in English. There's one catch: The teacher makes mistakes on purpose. Everyone looks and listens for the mistakes. When a student hears/sees a mistake in the teacher's reading/translating, he yells "Stupid!" or "Wrong!" or "Terrible!" or whatever in the target language. Normally this sounds like the whole class yelling at me. After they stop me for a mistake, they have to go back and do the sentence all together as in normal choral translation. When they get done doing the sentence correctly, it's back to you the teacher and everyone listening and waiting for your next mistake.

Most of your mistakes will draw on their knowledge of vocabulary. You can also make mistakes to make points about grammar, like saying "is" instead of "was."

One tip: Be sparing with the number of your mistakes; the fun is in the anticipation.
Posted by James Hosler 2 comments