ACTFL Lowers the Bar (in a good way)

I spent a bit of this morning reading through ACTFL's Performance Descriptors for Language Learners. Despite some red flags, such as the assumption that output should be a part of language learning from the earliest stages and the special nod to the special classical languages, the document has a lot to offer. More than its sister, anyway, describing the standards themselves.

The part I liked the most was the attempt to correct the all-to-common misunderstanding that "after four years of foreign language study in high school you should pretty much be able to be a spy." 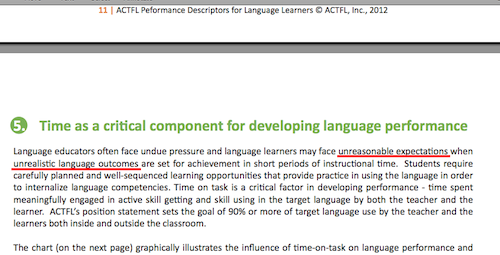 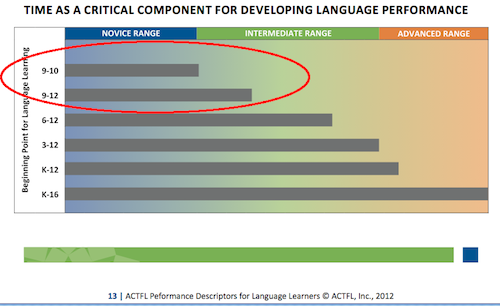 The last picture is pure gold. If you start learning a language in grade 9, your high school career won't even get you close to the "advanced" range. It's not supposed to, it's impossible, and there's no shame in that for students or teachers. So, in a good way, ACTFL lowers the bar, or rather acknowledges that the correct height is much lower than some would have it.

Leave a comment below or discuss on Google +.
Posted by James Hosler 0 comments

A personal opinion: I believe in making things as simple as possible. If a district has purchased a system to report grades, then teachers should try as much as possible to make that system work for them. If parents and students have the habit of using a particular system to check grades, the teacher should not try to form new habits unless absolutely necessary. If the teacher must enter grades into the district system, why would the teacher want to use more time entering the same information in a different system? I know there are grading systems specifically for standards-based grading, such as BlueHarvest and ActiveGrade, and that the truly bright create their own using GoogleDocs, but I guess all that stuff is just too complicated for a dope like me.

A technical note: I use a conjunctive-based system of standards-based grading (inspired by Chris Ludwig) wherein each standard has a 0-4 rubric (inspired by Marzano) and students work to advance up the rubrics. What I write here is specific to my particular system, but the basic technique of making assessments and overall standards "not a part of the final grade" should be useful to teachers using different flavors of standards-based grading.

My gradebook has three sections. It looks like this:

Section 1: Individual Assessments
These are all the pieces of evidence you collect throughout the year to determine what your students know and are able to do against your standards. Each one will of course be aligned with a specific standard. If you look close you can see that each of my assessments begins with an S (for standard) and L (for level; 2, 3, or 4 according to a rubric). So "S4-L3 tumultus dictation" was an assessment for the third level of standard 4. If an individual project or exam addresses more than one standard, then that project or exam should be listed multiple times (for example, S2-L2 Final Exam as one entry and S4-L3 Final Exam as another). Make sure when you create the assignment in PowerSchool that you un-check "include in final grade":

Section 2: Overall Standards
Each of the individual assessments gives you evidence to determine what level each student is at for each standard. If Jill did well on that S4-L3 assessment, then you know she is at level 3 for standard 4. For standard 4, then, her overall standard 4 rank in "section 2" is a 3. If earlier in the quarter she was really weak on standard 4, you of course do not let earlier attempts average into her overall rank for standard 4. She is at an even 3 overall because she has shown you she can do all the content for standard 4, level 3 on the most recent S4-L3 assessment. All of the individual assessments throughout the grading period effect the overall ranks in this way, making them go up or down depending on whether the students have demonstrated mastery, improvement, regression, or whatever else. Make sure that the "assignment" entries for these overall standards are not included in the final grade either.

Section 3: Overall Letter Grades
This is the only column that I "include in final grade." Since I use conjunctive grading, Jill's final letter grade depends on the combination of ranks she has earned: 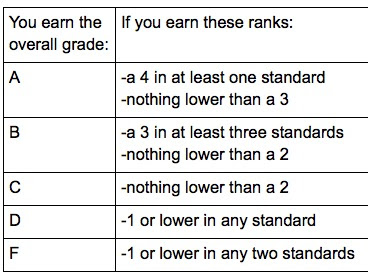 (The first image doesn't line up exactly with this vanilla example.)

This will make the first semester grade depend entirely on what you enter as the "overall letter grade" for quarter 2, allowing students to make improvements on any standard at any time throughout the semester and get their due reward.

You can leave a comment below or discuss on Google+.
Posted by James Hosler 0 comments

Personalized Assessment Made Easy: An Example of Standards-Based Grading in Foreign Language

One my dozen or so standards is "Hearing Latin." The point is to assess how well students can deal with hearing the sounds of the language and, at a more advanced level, how well they can understand the sounds they hear. Here is the rubric: 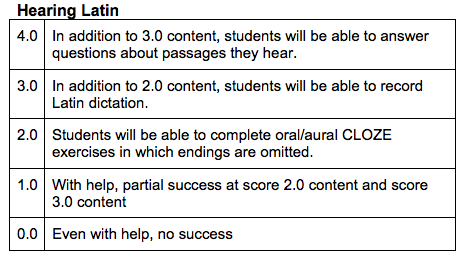 The beauty of all this, though, is that it makes personalizing assessment (a.k.a. differentiated assessment) super easy. First, take a quick look at the assessments for levels 2, 3, and 4.

Assessment for Level 2: Students fill in endings as they listen 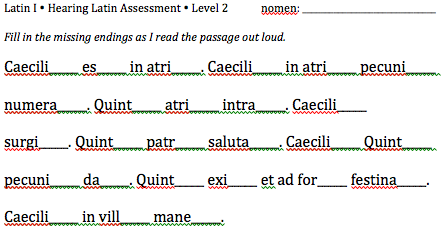 Assessment for Level 3: Students write the whole passage as they listen

Assessment for Level 4: Students answer questions as they listen 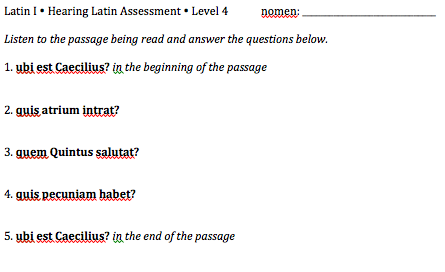 And of course, the passage for each assessment can be THE SAME:

So each individual student is attempting whatever level they need according to previous assessments of the same standard. This is a real benefit of creating rubrics according to Marzano's Formative Assessment and Standards-Based Grading. Because each higher level build directly on the level below it, the tasks have the same foundation but different degrees of depth and rigor. So all I have to do is read the passage three times out loud as each student completes one of the three assessments. Easy peasy.

I did two posts recently about a desire to move my students as soon as possible to real, authentic Latin. By authentic Latin I had in mind the likes of Ovid, Catullus, Cicero, etc, that is, the stuff on the IB and AP exams and the stuff I grew to love in my study of classics in college.

So, yeah, I was wrong. That's not what's best for kids.

Somewhat in an effort to save face, I'm sure, I'll stand by my opinion that "golden age" Latin literature is more "authentic" than Latin literature from other times, primarily because, for lack of a better explanation, the stuff before "looks forward" and the stuff after "looks backward" to the works of those great masters of the late Republic and early Empire. (Bloom has argued that the same relationship exists between Shakespeare and every other English writer.)

But I can no longer sleep well at night if I am to get up and teach kids at a break-neck pace just to get to the authentic, exam material within some arbitrary timeline. And not just arbitrary, but impossible for all except one student in thirty. It seems Latin teachers like to brag about how soon their kids are reading Caesar or Cicero or Catullus. "Before the end of the second year!? You must be a great teacher!" Little would that commenter know (or care?) that in a typical class of sophomores only a handful would actually care about doing that kind of reading (that is, translation), and fewer still (if any) would be truly capable enough to do so.

So, I'm saying I had set a goal for my students to begin reading Catullus by the end of their second year of Latin, a goal which, despite my best intentions, turns out to have been absurd.

My new goal is for my students to develop a profound understanding of the Latin language during the first three years, and during the fourth year to delve into the real stuff according to the IB syllabus. Of course it would be easier if my students had more than just three years to prepare. But they don't, which brings me to my next-to-last point. It is tempting for me to take the first three years even slower and have the fourth be part of a natural progression. In this way the students could learn the language in a less threatening manner. We do not have this luxury, however, and I am not convinced I would take it if I could.

Time for my final point, which will be more practical. You have read my vision for the first three years to be a slow, rigorous adventure through language in order to internalize the material. This will involve lots of active Latin and lots of repetition. As far as the actual pace in concerned, here is the outline (we use the Cambridge Latin Course):


This is quite a bit slower than the 16 and 14 stages I have covered the past two years respectively. And it is A LOT slower than the pace I have seen others follow. Remember: The idea is to have enough time for plenty of active Latin and repetition.


An increase in pace with fifteen stages instead of twelve, but if we have learned truly to read Latin during the first year it should be doable. Also, Stage 27 marks the end of a few stages about the subjunctive.


Fourteen stages, ending with Ovid, a major author on the IB syllabus.

I have seen other schedules in which the first year is packed for the sake of more time in the later years. I figure if you have time, the first year is the place to use it. More speed will be possible in the second and third years if there is a solid foundation.


Thank you especially to Robert Patrick, Justin Schwamm, Laura Gibbs, and Kevin Ballestrini for great conversations around these points.

Email ThisBlogThis!Share to TwitterShare to FacebookShare to Pinterest
Labels: on foreign language pedagogy, on Latin pedagogy

I failed my students last year in my initial attempt at standards-based grading by not communicating to them what exactly the different levels of the 0-1-2-3-4 scale meant. In penance, I am spending many summer hours drafting detailed rubrics for each learning target for all of my classes. I will share and discuss those here as soon as they are finished.

For now, however, I can share the following document, which will be plastered to my wall next year:
The influence of Chris Ludwig's "letter explaining standards-based grading" is everywhere, especially in the description of the lower ranks. The idea of this poster is to explain roughly what each rank represents in language they can understand. I figure (with Marzano, the ultimate name-drop) that we need a lot less teacher-speak in classrooms.